He obtained his diploma in classical studies from the J. Stellini High School in Udine in 1975.

He then attended Trieste University, graduating in law in 1979 with a first-class honours degree. In 1981 he passed the exam allowing him to practice as a lawyer in the Court of Appeal of Trieste, ranking first among his fellow candidates.

He is a member of the Milan Bar Association and since 1996 he has been admitted to practice before the Court of Cassation and courts of a higher instance.

He has always worked solely as a lawyer, running his own offices in Udine and Milan and working for clients in Friuli, Trieste, Veneto, Emilia-Romagna and Lombardy.

In the field of civil law, he has handled successfully cases for entrepreneurs and medium to large companies sometimes involving significant amounts of money. In that of criminal law he has acted as defence counsel in many important proceedings ending in favourable results for his clients and receiving major press coverage.

Gabriele Cianci’s activity as a lawyer is distinguished by his ability to tackle complicated judicial situations. On several occasions he has managed to achieve successful results – before Courts of Appeal and the Supreme Court of Cassation – in proceedings that had seemed to be hopeless, sometimes entrusted to him after unsuccessful attempts by others.

Gabriele Cianci is a guarantee of absolute independence and transparency in the sole interest of his clients, as he is not linked to any association or local interest groups.

Gabriele Cianci has a library of legal publications going back to the nineteen-sixties which he updates regularly and now comprises thousands of volumes. Thanks to the most recent specialised online sources, also, he is able to consult case law and look up rapidly matters relating to the law. 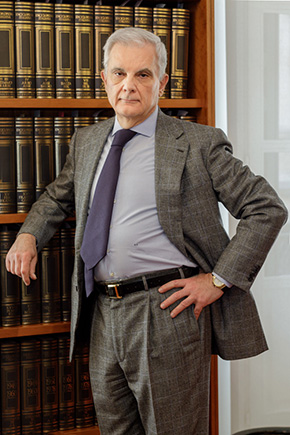 Whom Can I Help

Gabriele Cianci can be of particular help to clients who find that they have to deal with challenging and complex issues involving their freedom, family, wealth, business or reputations.

These cases are often difficult ones, in which significant financial interests are at stake or that lead to overwhelming worries that interfere seriously with one’s quality of life.

Situations may become entangled and drag on for long periods of time, so that the client may be dissatisfied with the work of earlier lawyers.

Gabriele Cianci – who can call, if appropriate, on the best technical experts in any scientific subject – can provide straight away a preliminary opinion on the events brought to his attention, suggesting what line to follow, and with the ability to act rapidly and indeed, if necessary, immediately.

Unlike law firms consisting of a number of lawyers working together, if Gabriele Cianci accepts an appointment he will always deal with the case personally. At the same time, however, he can count on a network of qualified colleagues to provide activities throughout Italy.

It should be pointed out that conducting a criminal defence, litigation or out-of-court activities is conceptually very similar to studying an effective strategy. In this sense, the principles codified by great thinkers such as Sun Tzu in “The Art of War” and Carl von Clausewitz in his treatise “On War” are forever topical and can be applied normally to business economics and management theory.

In short, the intellectual work of a lawyer must have a rational basis and be thoughtfully planned out. It must weigh up the variables consisting of the need to take decisions within a limited timeframe, in a sometimes stressful context in which the information available is not thorough, considering that defending is intrinsically simpler than attacking (defendants will have an advantage over plaintiffs, a lawyer for the defence over the public prosecutor and debtors over creditors).

Ultimately, criminal trials, civil suits and representation in sometimes complex activities have to take into account the end goal wished to be achieved in the client’s best interest and the intermediate goals for reaching it, in relation to the resources that can actually be employed complying in full with the law.

Thus, the logic with which the facts are examined becomes indispensable. It must be based on a perfect understanding of the “terrain” on which one is competing, in other words on a complete mastery of the concepts, of the legal doctrine and of case law regarding the matter under discussion.

Unfortunately, it must be noted that the legal professions – due also to the exponential rise in the number of enrolments in professional registers and the gradual decline in cultural education in our country, which has worsened in recent years – are not what they once used to be, when joining a legal practice was in itself a secure guarantee of reliability.

It is therefore essential that the choice of a lawyer should be made in an informed manner and be merit-based, founded on the experience gained in the field and, last but not least, on how the lawyer presents him or herself and on their speaking and writing skills.

These latter factors are becoming frequently crucial in a world in which – as we see every day in the mass media – ideas are confused and superficiality rules.

Gabriele Cianci provides legal advice and assistance both in court and out-of-court in some of the key sectors of the Italian legal system.

These include, in particular:

Advice to businesses and companies

Gabriele Cianci can recommend the most correct and appropriate legal solutions for all aspects of business and company life. These include contracts with employees, specifically executives, managers and middle managers; supply agreements; agency contracts; minutes of shareholders’ meetings and Board of Directors’ meetings authorising the conferral of delicate management powers or important activities; the compliance of financial statements with legal requirements, in order to avoid subsequent civil, tax and criminal litigation; corporate due diligence procedures; transactions involving the conveyance, merging, spin-offs, transfers and leasing of businesses.

Gabriele Cianci is an expert in civil litigation thanks to the experience acquired by him in many decades, also in extremely complex situations, namely in legal cases concerning all sorts of different matters, heard before courts of the first instance, courts of appeal and the Supreme Court of Cassation. In these circumstances, a lawyer must be exceptionally good at focussing on the crucial aspects of the dispute, so that he can present the judge with the essential arguments in the client’s favour, to which the greatest attention should be paid. The way in which a lawyer appears before a judge is important, as is the lawyer’s ability to set out the crucial points of the dispute clearly and effectively.

Assistance in business crises and insolvency

Based on his expertise arising out of significant actual cases and an in-depth knowledge of the relevant regulations, Gabriele Cianci can assist entrepreneurs and businesses through all stages of company crises and insolvency. He is a firm supporter of the need to correct the distorted and sometimes odious application of the 1942 Bankruptcy Law, through the introduction in Italy of a thorough reform based on Anglo-Saxon culture, according to which a business should always be protected in any case, and an unfortunate entrepreneur should be given another chance.

Defence in criminal proceedings based on financial matters

Gabriele Cianci has acquired a vast experience – often with great success and almost always with results of use for the client – whether acting as counsel for the defence of a defendant or representing a plaintiff or a legal person held liable in criminal proceedings concerning economic law.

These include, for example:

Gabriele Cianci is able to act as a barrister for the defence in proceedings for any type of crime, particularly if reconstruction of the facts and the legal issues to be tackled feature highly complex aspects. The consequent risks for the client may only be avoided by conducting the trial in a well-thought-out manner and with great attention, requiring a solid judicial culture, examination and analysis of the documents and preparation of a suitable defence strategy.

Gabriele Cianci’s professional relationships with his clients will always be based on the reasonable application of the rule of a result-based fee, according to a transparent and binding written agreement between the parties.

In practice, the steps indicated below will be followed:

Where We are and where We work

Gabriele Cianci works mainly for clients in Northern Italy, in the provinces of the three Venetias, Lombardy and Emilia-Romagna.

He feels “at home” in Rome, for defending clients before the Court of Cassation, the Council of State and the Constitutional Court.

Of course, should the client so request, taking steps anywhere in Italy or even abroad would not be a problem.

Gabriele Cianci can count on a network of qualified colleagues in every judicial district. Meetings with clients can be held in the Udine and Milan offices, or in offices and meeting rooms anywhere.

When a hearing or appointment is fixed, Gabriele Cianci never makes an exhausting journey on the day concerned. Rather, he always arrives at the venue on the previous evening so that he can meet his commitments punctually.

The Udine office is at no. 39 of Via Mercatovecchio, in the city centre, a few minutes away from the large car park in Piazza Primo Maggio.

The Milan office is at no. 2 of Via Augusto Anfossi, near the Palazzo di Giustizia (the main courthouse).